Know how to handle hair loss

When a man begins to go bald, two things go down the drain—his hair and his confidence. Some 62 percent of balding guys in a Spanish study said losing their locks could deflate their self-esteem. This isn’t 21st-century superficiality: “Thick hair has always been associated with youth and masculinity,” says Albert Mannes, Ph.D., a University of Pennsylvania researcher who’s studied perceptions of balding. “Hair loss signals aging.”

But baldness can be deceiving: Two-thirds of men face hair loss by age 35, and a bad genetic hand is often to blame. Male-pattern baldness is an inherited sensitivity to dihydrotestosterone (DHT, a by-product of testosterone), which leads to finer hair, a receding hairline, and finally a deserted scalp.

That’s why scientists—who may be thinning up top themselves—have put balding in their crosshairs. Read on for new ways to save what’s there, regain what’s gone, or—if it comes to it—learn that you can lose and still win.

PLUS: What do your fingernails and hairline have in common? Check them out for 7 Weird Signs of Health Troubles.

1. FIND THE CAUSE
Doctors often diagnose balding by sight alone: If your hair is only on the sides and middle top of your head, the bare areas form the letter M (as in male-pattern baldness). But thinning that spreads across your scalp and not to your crown or temples often indicates an underlying health issue. “Hormonal or nutritional deficiencies, such as thyroid problems, low iron, or low protein, can cause shedding,” says Carolyn Jacob, M.D., the founder of Chicago Cosmetic Surgery and Dermatology. In other words, “don’t assume it’s genetic,” says Marc Avram, M.D., a clinical professor of dermatology at Weill Cornell Medical College. One hitch: A discernible pattern may take years to emerge, so pinpointing the cause simply by the look of your locks may be difficult.

2. SIDE WITH THE SCIENCE
Late-night TV ads offer legit fixes for many problems—stains, clogged gutters, subpar pancakes—but balding isn’t one of them. “Be wary of infomercials or Internet ads touting hair-growing shampoos or pills,” warns Marc Glashofer, M.D., a dermatologist in Long Beach, New York, who specializes in hair loss. “Most haven’t been clinically studied and are usually a waste of your money.” (An effective hair-growth shampoo is out there, but it isn’t advertised as such. Keep reading.) Stick with the drugs that have been green-lighted by the FDA: finasteride (Propecia) and minoxidil (Rogaine). “Both are better at maintaining what you have than regrowing what you lost,” says George Cotsarelis, M.D., a professor of dermatology at the University of Pennsylvania.

Propecia works by blocking the conversion of testosterone to DHT, but there’s a side effect to consider: It could mess with nerve-signaling pathways to your penis, resulting in ED and a loused-up libido, a study in the Journal of Sexual Medicine found. Dr. Cotsarelis says most men don’t experience these side effects, but if you’re uneasy about the ED risk, skip the Propecia.

As for Rogaine, it’s thought to stimulate hair growth, although scientists aren’t sure how. “Rogaine often gets a bad rap because people don’t use it correctly,” Dr. Cotsarelis says. “You have to use Rogaine at least twice a day and for at least six months before you see any results. It can actually cause shedding in the first month or two.” In other words, don’t give up after just a week of slathering it on your scalp.

3. SWITCH SHAMPOOS
Dozens of shampoos claim to make your hair look thicker, but only one ingredient has been shown to truly preserve your pate. Ketoconazole, an antifungal used to fight dandruff, may save your mane by reducing production of testosterone (and therefore DHT) in hair follicles, say scientists at the University of British Columbia. In fact, in a Belgian study, balding men who used a 1 percent ketoconazole shampoo two or three times a week for six months saw a 17 percent reduction in hair shedding.
Try Nizoral A-D, the only nonprescription shampoo that contains ketoconazole. “Use it with Propecia or Rogaine, especially if you have dandruff, because flaking can prevent penetration of Rogaine into the scalp,” suggests Dr. Avram. Lather up with a quarter-sized dollop two or three times a week; any more could dry out your hair and cause breakage. Use non-irritating baby shampoo in between.

4. EAT SMARTER
Cleaning up your diet may save you from the Mr. Clean look. Start by skipping fried foods; this may reduce oil-gland activity, slowing the switch from T to DHT, according to research from India. And watch the desserts: The insulin flood from consuming a lot of sugar can trigger the release of testosterone, making it available for conversion to DHT.

TRY THESE: The Best Foods For Healthy Hair

5. JOIN THE TRANSPLANT LIST
Doctors have mercifully pulled the plug on old-school hair plugs—tufts transplanted from the sides and back of the head onto bald areas. The result was often a scalp that looked more like a toothbrush than a convincing head of hair. Today, two better options exist. One is follicular unit transplantation, or FUT: “Surgeons harvest a strip of scalp and cut it into groups of three or four hairs,” says Dr. Cotsarelis. The downside is that it may leave a thin scar, a concern if you keep your hair cut short.

That scar factor is the reason men are increasingly choosing the second option, follicular unit extraction (FUE). This process involves robotically harvesting individual follicles from the back of the head. “For the past several years, we’ve performed FUE in more than 95 percent of cases,” says Alan Bauman, M.D., a hair-loss specialist in Boca Raton, Florida. “It’s a shorter, less-painful recovery and completely eliminates linear scarring along the back of the head.” The cons: It’s more challenging and takes longer than FUT, and your doctor has to trim more of your hair beforehand. “Wear your hair a little longer to camouflage the trimmed area,” says Dr. Avram. “Or wear it short in the back so when we trim it, it blends in.”

Neither technique is cheap; expect to drop $5,000 to $10,000. Find a surgeon who specializes in FUT or FUE and is a member of the International Society of Hair Restoration Surgery. (Search by location and procedure type at ishrs.org/physician-search.) “A good doctor will present a medical plan to stop the progression of your hair loss, along with your hair transplant design,” says Dr. Bauman.

After surgery, resist the urge to pick the scalp scabs. “Shower every day,” says Dr. Avram. “The scabs will fall off more quickly naturally.” Apply moisturizer to the removal site, and avoid intense cardio for three or four days. If your heart rate hits 130, your scalp could bleed, he says.

6. GROW TOWARD THE LIGHT
In 1967, a scientist zapped the skin of shaved mice with lasers to see if the light caused cancer. It didn’t spark the big C, but it did trigger the big H: hair. This led to low-level light therapy, an FDA-approved treatment for mild to moderate male-pattern baldness. In a new Korean study, people with hair loss who regularly wore a light-therapy helmet at home noted increases of 22 percent in thickness and 15 percent in hair density after 24 weeks.

7. DO AN ABOUT-FACE
Balding men tend to cope in three ways: They compensate by focusing on fitness or fashion, dodge mirrors, or simply accept the changes up top. Acceptance takes the stress out of hair loss while the other strategies increase it, a German study found. So reframe your view: “Interpret balding as a distinctive look or a sign of maturity rather than as a sign of aging,” says study author Dirk Kranz, Ph.D.

8. DUMP YOUR COMB
Skip the comb-over and channel Vin Diesel instead. “Nine times out of ten, a shaved head is a vast improvement,” says Todd “Sween” Lahman, owner of Sweeney Todd’s Barber Shop in Los Angeles. In fact, Mannes’s research reveals that a guy with a shaved head is viewed as taller, more masculine, and more dominant than one with a full head of hair. “People estimated that they could bench-press about 13 percent more weight,” he says. Mannes also found that men with shaved heads were deemed more attractive than those with thinning hair. Still hesitant to take it all off? Start by shaving with an Oster #3.5 blade; then gradually progress to totally bald.

PLUS: The Best Hairstyles for Your Face Shape

WHAT YOUR HAIR SAYS ABOUT YOUR HEALTH
What’s growing up top may be a powerful predictor of what’s going on inside.

Blond or Red Hair
Fair-haired folks and redheads have a higher risk of Parkinson’s than those with dark hair, a Harvard study found. One theory: Lighter color means less melanin, a neuroprotective pigment.

Fight it: Use nature’s app. In another Harvard study, men who ate at least five apples a week had a 46 percent lower risk of Parkinson’s than guys who maxed out at one a month.

Premature Graying
Too much salt and pepper could signal ticker trouble. A study from Turkey found that men with premature graying have thicker carotid arteries, a sign of heart disease.

Fight it: Snack on English walnuts, almonds, and pistachios. Researchers in China have associated the sterols found in nuts like these with thinner carotid arteries.

Balding
If your hair has gone on hiatus, prostate cancer may be in your future. Balding men face a higher risk of this cancer, a new Duke study reports. One potential link: elevated androgens.

Fight it: Exercise can lower your risk of prostate cancer. Make it cardio exercise, which may lower the androgen levels in your blood to slow balding, a study from India reports.

Our Services
Our Reputation
Non-Surgical Treatments
News
FAQ
About
Contact 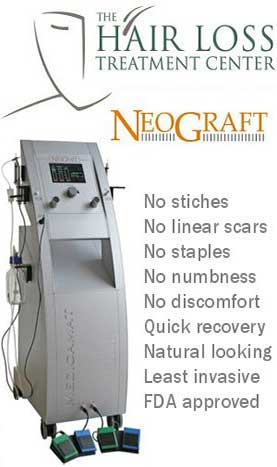 No stitches, staples, scars or discomfort and FDA approved!