If you’re losing your hair (alopecia) or have thinning hair, it can have a devastating effect your self-esteem. Almost every society in the world associates luxurious hair with youth, beauty, and good health. Women often associate their hair with their sexuality, sensuality, and beauty. To men, their hair represents their virility and, like women, when they experience conditions that cause hair loss, a bald spot, or thinning hair, they believe they aren’t as manly or attractive any more. This psychological obstacle can even impact men’s and women’s confidence in the workplace.

Hair continuously grows out of a single follicle for a period of about four years, all the while being nourished by surrounding cells. The follicle then undergoes a short hibernation phase of about three months, recuperates, and sheds the current hair strand attached to it before starting production back up. At any one time, about 10 percent of our follicles are in that resting state while the rest are happily pumping out luscious tubes of keratin.

At any one time, about 90% of the hair on a person’s scalp is growing. Each follicle has its own life cycle that can be influenced by age, disease, and a wide variety of other factors. This life cycle is divided into three phases:

However, the cycle can be interrupted or made shorter by a number of things, including when blood levels of the androgen Dihydrotestosterone (DHT) are too high, such as with AGA, or when the immune system is mistakenly compelled to attack the follicle, such as with alopecia areata (AA). It can also be permanently shut down when follicles are damaged beyond repair (we’re born with all the hair follicles we’ll ever have, so once one is taken out of commission, that’s that).

Primarily based on age and heredity, the rate of hair growth slows and hair follicle thickness is impacted.

Many causes of hair loss are the same in both women and men; some of which are listed below:

Many of these episodes of hair loss due to illness (such as fever, radiation, anemia) rectify themselves over time and no treatment is necessary.

Hair Thinning and Loss in Women

It’s true that men are more likely to lose their hair than women, mostly due to male pattern baldness.

Mistakenly thought to be a strictly male disease, women actually make up forty percent of American hair loss sufferers. Hair loss in women can be absolutely devastating for the sufferer’s self image and emotional well being. Reasons can range from the simple and temporary—a vitamin deficiency—to the more complex, like an underlying health condition. 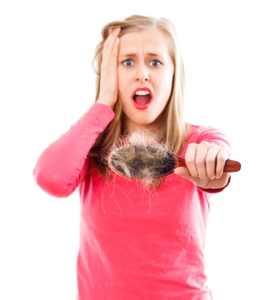 Female-pattern hair loss, called androgenic or androgenetic alopecia, is basically the female version of male pattern baldness. This can also be is a hereditary condition that affects about 30 million American women, according to the America Academy of Dermatology, and is the most common kind of hair loss, happening to about 50% of women. Although it mostly occurs in the late 50s or 60s, it can happen much earlier.

Unlike men’s hair receding from the forehead or the crown, women usually notice thinning on the top third to one half of the scalp. Sometimes their frontal line stays intact, but the part is gradually widening or more of their scalp is visible when their hair is pulled back.

Normally, each time a hair follicle is shed, it is replaced by equal sized hair. But in women with female-pattern hair loss, the new hair is finer and thinner–hair follicles are shrinking and eventually they quit growing altogether. 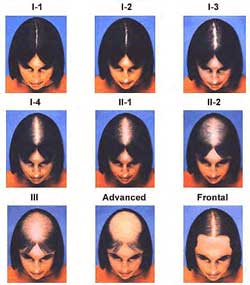 Other reasons for hair loss include hormonal changes (pregnancy, birth control pills, or menopause). This hair loss can occur a couple of weeks to six months after any of these experiences. In many of these cases, the hair will grow back on its own.

Other ways to thin hair is self-inflicted – hairstyles like cornrows or too-tight braids, some hair dyes and permanents, excessive brushing, shampooing, blow drying and straightening.

Androgenetic alopecia or common male pattern baldness (MPB) accounts for more than 95% of hair loss in men. By the age of thirty-five two-thirds of American men will experience some degree of appreciable hair loss, and by the age of fifty approximately 85% of men have significantly thinning hair. Approximately twenty five percent of men who suffer with male pattern baldness begin the painful process before they reach the age of twenty-one. This type of hair loss, caused by a combo of genes and male sex hormones, usually follows a classic pattern in which the hair recedes at the temples, leaving an M-shaped hairline or a balding spot at the crown.

Contrary to popular belief, most men who suffer from male pattern baldness are extremely unhappy with their situation and would do anything to change it. Hair loss can, in some cases, affect every aspect of the hair loss sufferer’s life. It affects interpersonal relationships as well as their professional lives. 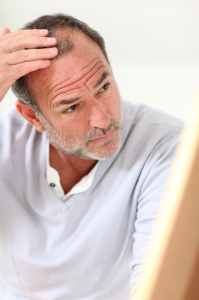 Men experience hair loss from many of the other causes which affect women as stated above.

This chart of hair loss pictures has been cited as the most typical. A tell-tale sign of male-pattern baldness is a receding, M-shaped hairline. Next, the hair on top of your head also starts to thin, leaving a bald spot. Eventually, the two meet, leaving a horseshoe pattern of hair around the sides. The Norwood Scale, seen here, is used to rate male-pattern baldness. 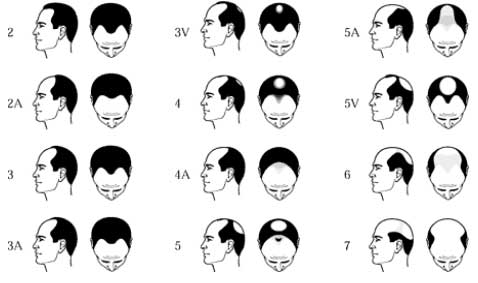 Our Services
Our Reputation
Non-Surgical Treatments
News
FAQ
About
Contact

No stitches, staples, scars or discomfort and FDA approved!